Finally have some time to sit down in front of the computer again, after more than a week's absence. Been very much enjoying the last days of summer; can't believe we're already in September... Though it's been warmer than last year, so it doesn't quite feel like autumn yet.

Aug. 26th
Last Sunday we went to the Awaodori festival in Koenji. I usually don't go to Koenji very often (this was actually only my second time there), but I should go more often cause it's an interesting area! It has lots of small streets and tiny local shops and restaurants, as well as being the center for some of the subcultures like the punk scene.
Once a year the streets get occupied by thousands of dancers for the Awaodori, divided into groups dancing through the streets.

Got there more than an hour before anything was about to begin, but people were already lining up.

The station was chaos...

We left the most crowded place, and went to have a peaceful dinner instead. There were so many food booths set up.

Once we were done eating, we found a really nice spot along one of the streets :)

Here's a video showing what was going on:

There was also a cute dog dressed up for the festival, but sort of melting in the heat...

Aug. 27th
Got up early to head out to Mitaka, for a visit to the Ghibli museum.

^That's the bus taking us there from the nearest station.
I'd wanted to visit the museum for some time, but somehow never ended up going, so I was glad to finally get the chance :) Pictures aren't allowed inside, but here are some pics from outside the building:

It's inside the Inokashira park, and I like how they've made the exterior covered in greens :)


Creepy cats in a window...

After finishing at the museum, we decided to walk through the park instead of going back to the train station.
Unfortunately the zoo was closed that day, so we headed up to the lake instead:

You can rent boats (^including swan boats) to go around on the lake yourself.

I guess the koi are used to being fed by passers-by as they came swimming up to us as soon as we got near the water...

Weather was really nice, so we eventually found another station and took the train to the Yoyogi park and walked through that one too :)


Aug. 28th
Went in the opposite direction of the previous day, ending up in Odaiba! 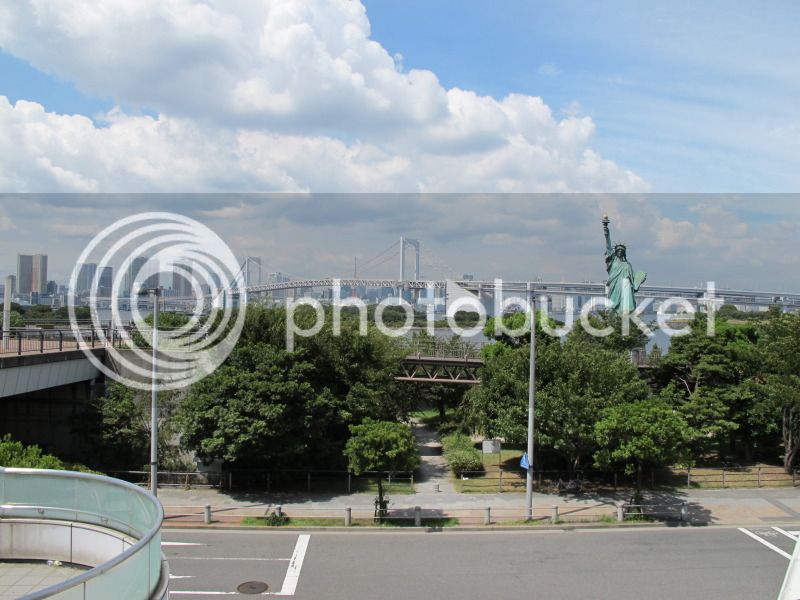 I generally don't like insects too much (At least nowhere near me), but I do enjoy the sound of the cicada(? 蝉). It's the constant background noise here during summer, there's no escaping it even in the city (This noise. Non-stop. All summer). The creatures themselves can be hard to spot though, but we found some on the island. 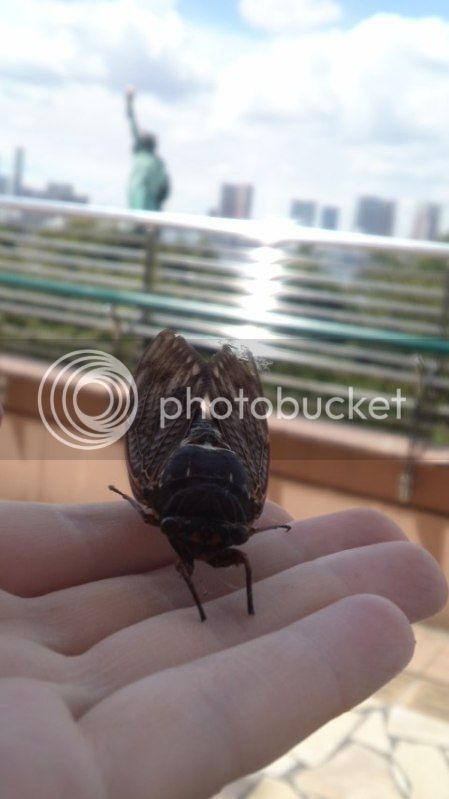 They're all slowly dying now that the summer is ending....


For lunch we went to AquaCity

King of the Pirates is located on the fifth floor there. The food is tasty, and they have a nice view of the skyline from the restaurant.

There were lots of people in the area this day as Fuji TV seemed to have some sort of event going on.

Apparently Fuji has also been doing some shows featuring Hiroshi, the monkey. So we watched his performance before leaving.

This is Hiroshi btw, he's cute:

He looked rather bored with his tasks. Hope they don't drive him too hard, especially in this heat.


Eventually we got to Shinjuku, and since we had some time to spare, we decided to visit the Government Building at the West side of the station.

Most tourists seem to go to Tokyo Tower, or now alternatively Sky Tree, to get a good view of the city. But the Government Building is completely free to enter, and there are observation decks on the 45th floor of both towers (I actually think the view is better up there compared to Tokyo Tower) 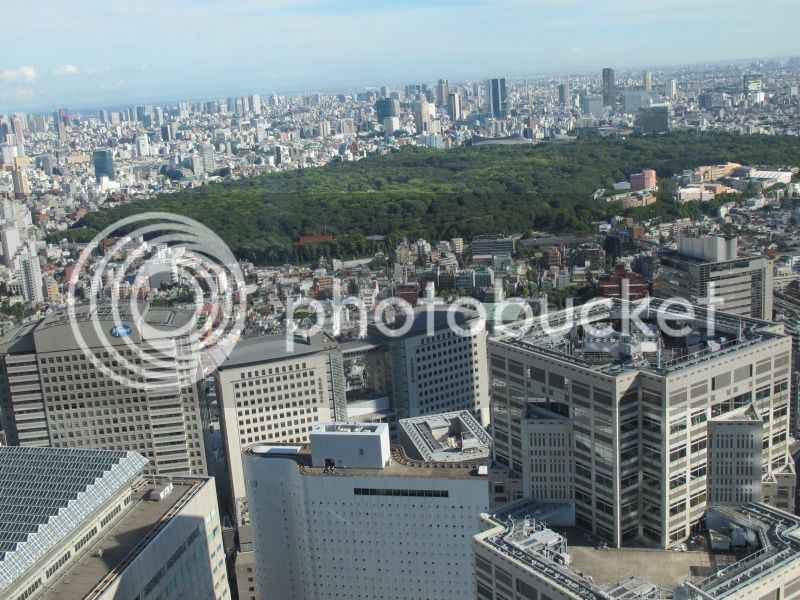 Ended the day by eating at The Lock Up nearby.

Aug. 29th
Took a short break from the sightseeing etc. to attend a live at AREA:

Several good bands playing, so I wish I'd have time to stay longer. Had to leave as soon as THE VELVET were done, so unfortunately I didn't get to see SaTaN this time. Hopefully they'll appeare at the same live again soon. (@MiMi; we would all be happy to see SaTaN at the 主催 in November!)
It was also the very last live of the headline band, 次世代エキサイト.

Met up early with the jouren of both Velvet, Plunklock, Satan, and Hi:BRiD to go pick up our tickets together, and with a group of almost 20 people I guess they decided shuffling the tickets etc. was too much work, so they just gave us the lot without even cutting them up, lol

Had a quick lunch together, before the doors opened. Some Nameless fans also joined us, whom I hadn't seen in a while since Nameless disbanded earlier this year, so that was really nice :) (The band often played with Velvet while they were still active)

Since this was Jisedai's last live, the other bands got slightly less time on stage than normal for the sake of the last band, but they still managed to play six songs :)

Both MiMi and Bera did their part in messing up Heroine ^^; But I guess that's only fair since we tend to mess up the various furi too. Didn't expect to hear genei fiction! And the new song is slowly growing on us.

Had to run as soon as the curtain closed, which meant I couldn't join the others for dinner, but we'll make up for it on Sunday (^^) That's the day of the sponsored event, and a friend who used to go to the lives 10 years ago will be joining us, so I'm really looking forward to going out with them all, even more so than the live itself :p

Aug. 30th
Got to go see The Phantom of the Opera again! :D

The theater is in Shinbashi, and you'd never guess it actually is a theater just from walking by it, since it looks like any other skyscraper in a business district (Really different from what I'm used to in London).
Our seats were perfect this time, at the center of the front row. Close enough to see all the details on the actors/actresses' faces and costumes, and kept getting eye contact with the people on stage :) The guy who played Firmin looked really fascinated at having foreigners there, lol. Both him and Andre were fun to watch, and I was very happy with the girls who played Carlotta and Christine that day (With daily performances the roles are constantly rotated between several people). Both had amazing voices perfect for the roles, and the latter was absolutely adorable (dimples!)


We caught the early show, starting at 13:30, rather than the evening show, so that we could relax and have a nice dinner. Again ordering this dessert at a nearby restaurant :)

Then returned home early, since we had a more exhausting day coming up in the morning...


Aug. 31st
This was the day we had planned to travel a bit out of the city, so we headed out in the direction of Takao. It's a small town surrounded by nature. Arriving at the station:

Our goal was to climb to the top of Mount Takao; a nearby mountain that has some sights on the way up. I recommend giving it a try if you're in the Tokyo area and have time for the trip - it's about an hour west of Shinjuku. You can choose between several different paths to the top, some more challenging than others. The path we took had a lot of things to see on the way up:

The first gate at the bottom right of the drawing is a little more than half way up the mountain. So we started out by taking a cable car part of the way.

That took us to a small plateau with a pretty view.

But before continuing the ascent of the mountain, we visited a small park on one of the other paths...

You can see the height of the Monkey Park in this picture:

There was an elderly man walking together with a monkey outside the park as well, and all the way to the top there were signs warning about wild monkeys.... Didn't meet any though.


The entire mountain was full of tengu statues and figurines:

The last part of the way was through a forest, which I enjoyed a lot since it's been years since I had the chance to walk through real nature.

When we finally reached the top, we could see Tokyo off in the distance. 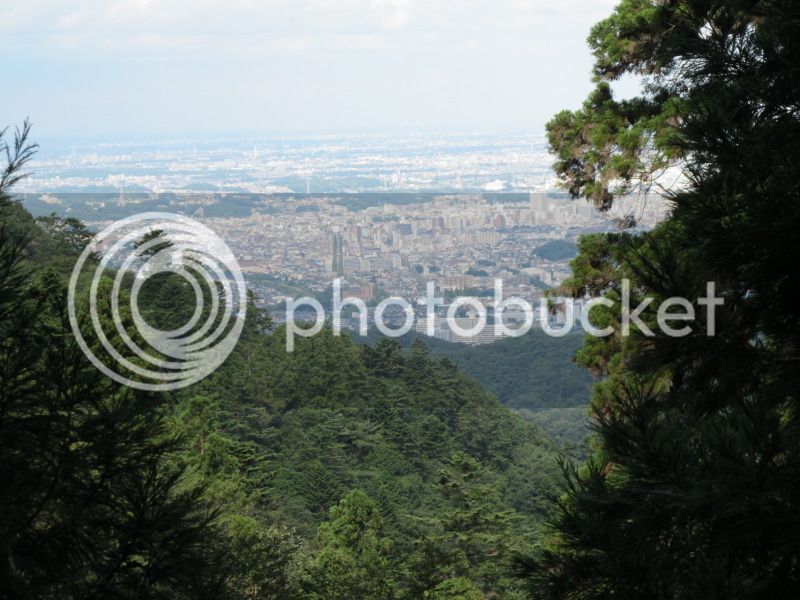 For the past couple of days we didn't have any specific plans, and was simply going around a little randomly. Got some really heavy rain showers yesterday, while we were in the Yoyogi park. Which was too bad cause it stopped a lot of the activities that usually goes on there on Sundays.... Didn't stop us from having crepes in Takeshita dori though :)

In the afternoon we had some errands to run in Shinjuku again, before dropping in on Arabian Rock for dinner. They have lots of nice foods and drinks there, and we got a chocolate fondue for dessert:

Really need to catch up on sleep now, so I think I'll just stay home and relax for the next couple of days. But looking forward to our plans for this weekend! :D