Thursday was yet a live day. Or rather, concert day. Ended up getting tickets for one of the extra shows with Sarah Brightman after all, and I'm glad I did :) 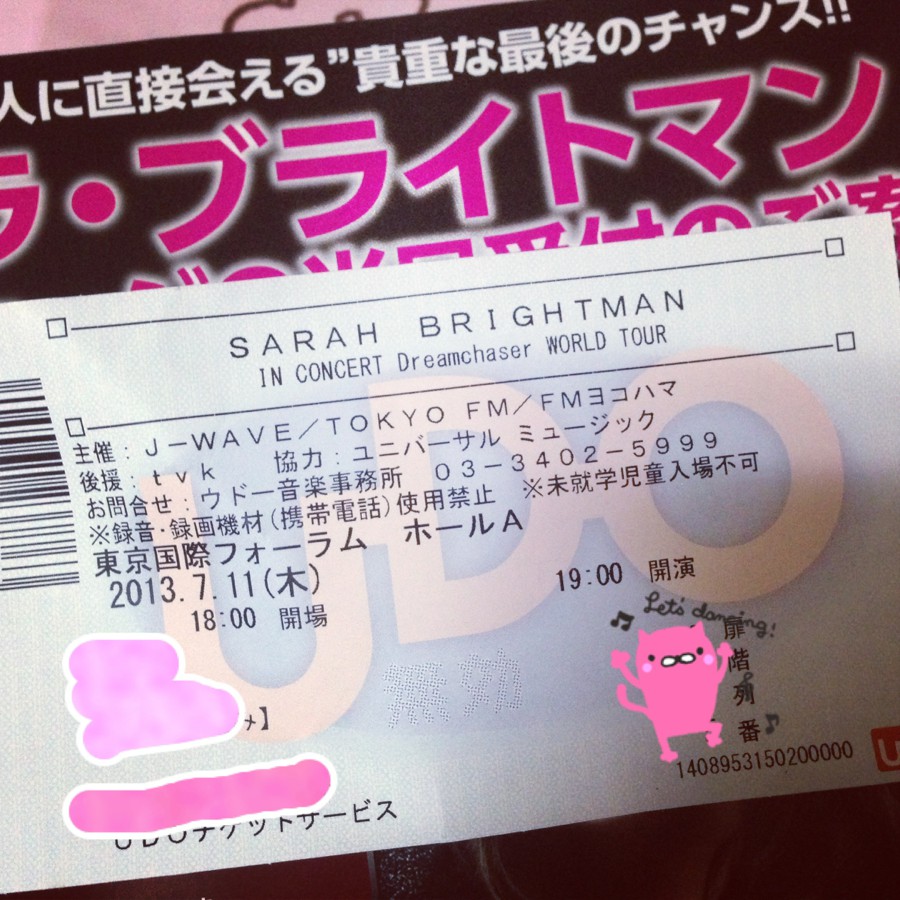 The concerts around Japan on her Dreamchaser world tour had apparently sold out pretty fast, so they added a couple of performances in Tokyo this week.

The concert took place at the Tokyo International Forum, near Tokyo station. Had never been to the venue/building before, but fortunately it was pretty easy to find with the help of phone maps (And the building was quite huge and hard to miss anyway). Arrived a couple of hours early and had lunch at a nearby cafe first. Then headed back to the venue again as the doors would open at 6pm. 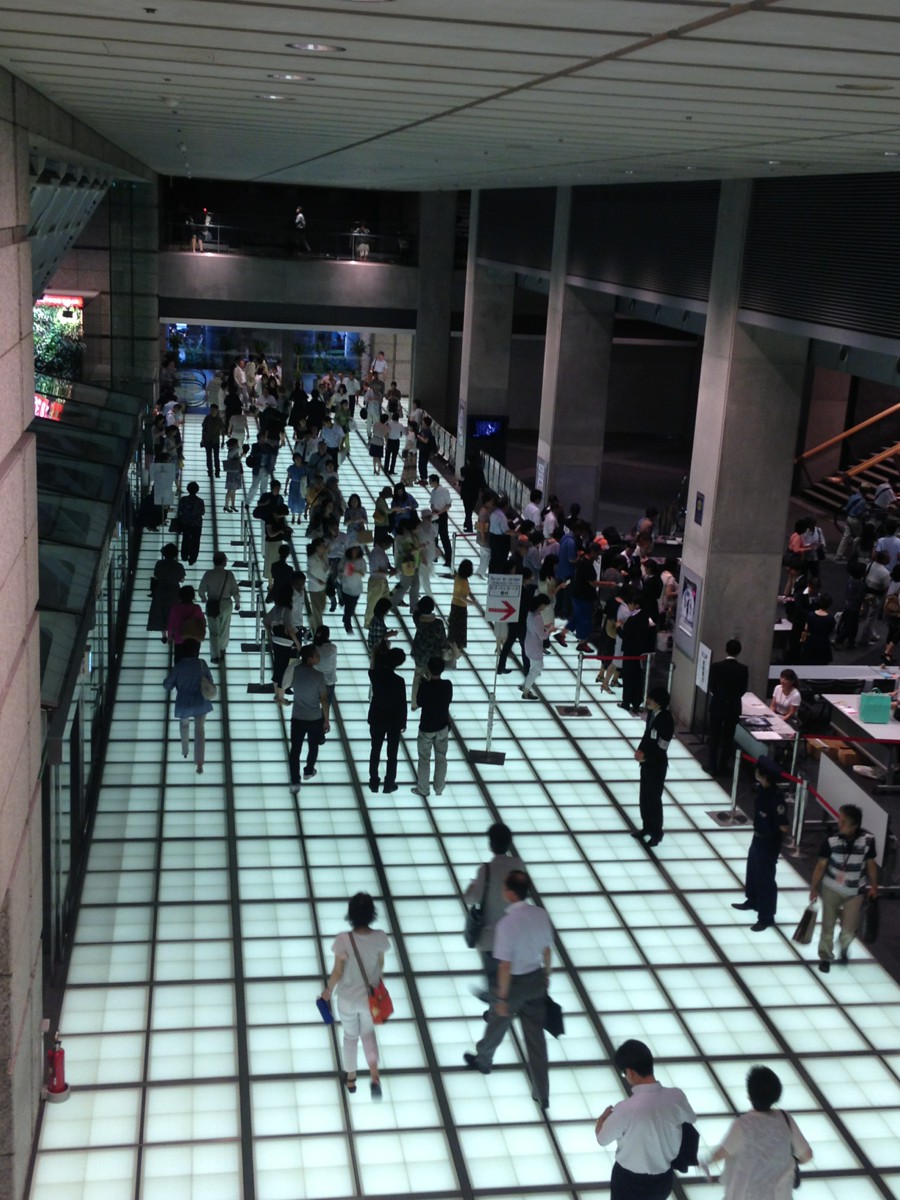 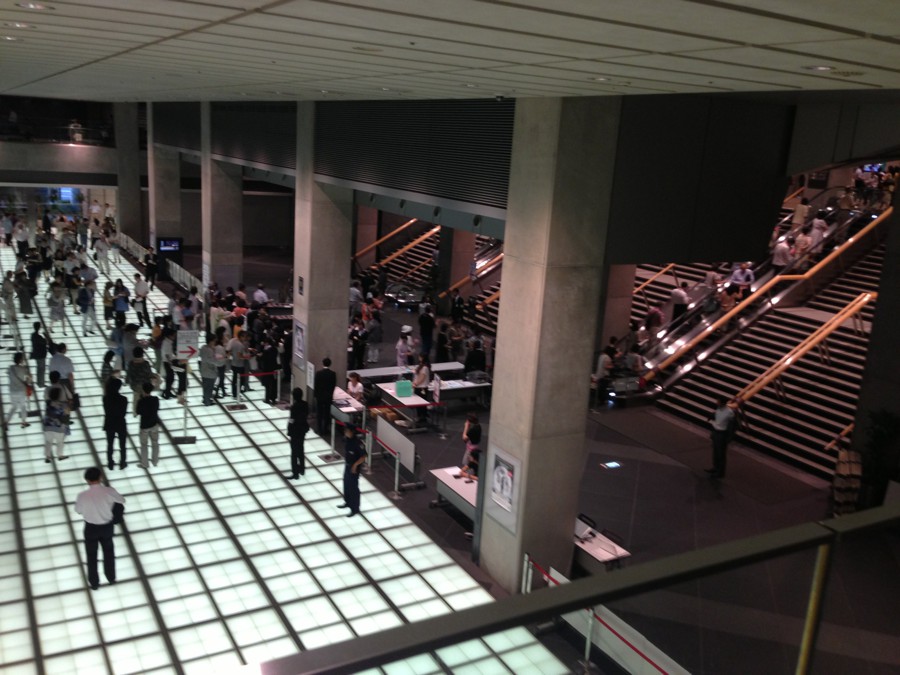 Entering went surprisingly smooth. It was sold out, and the place holds about 5,000 people. The crowd was waiting in the area with the white-ish floor in the pictures above. As they were about to let people in, they told us to form eight parallel lines. A few seconds later, eight lines had formed, without any coercion whatsoever from staff.... Japan, lol.

Inside, on the second floor, they were selling various merch. 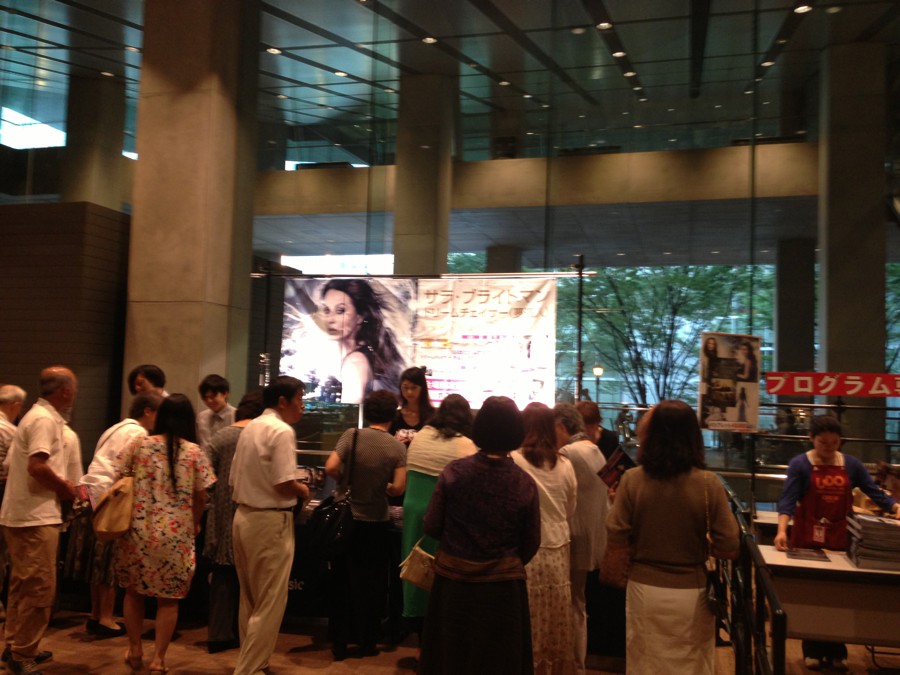 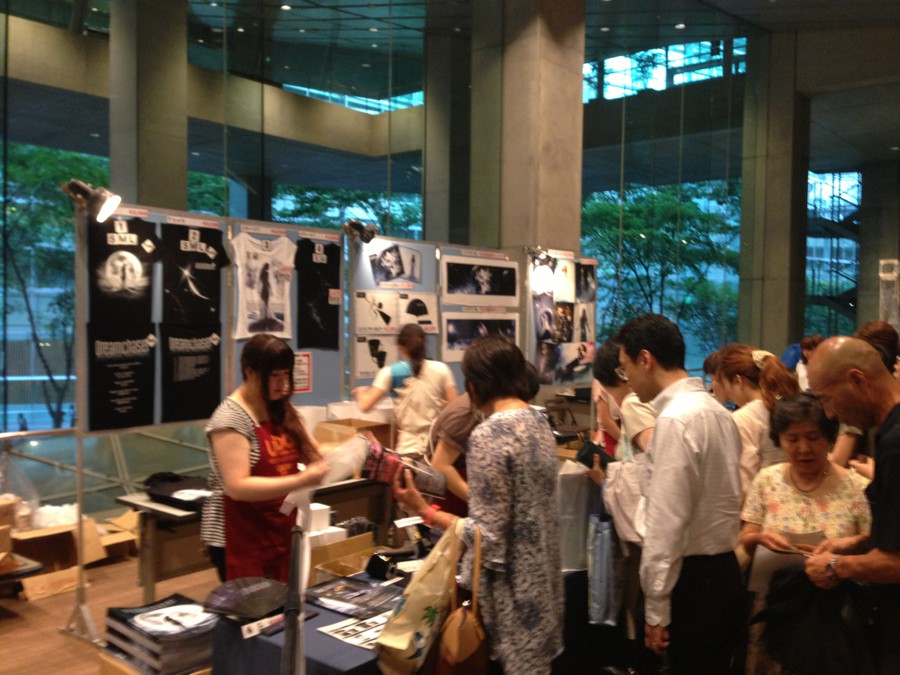 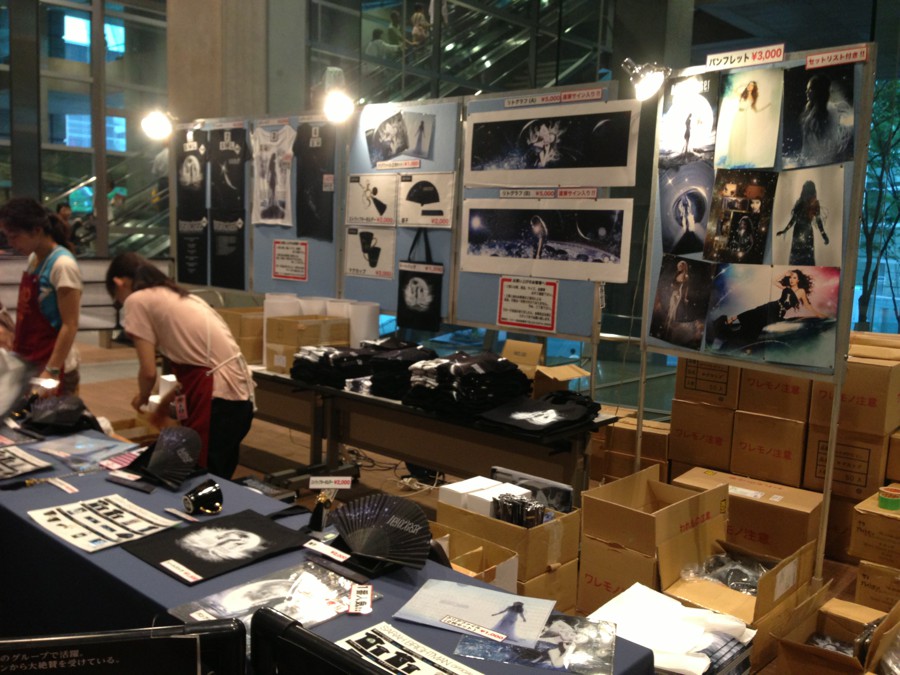 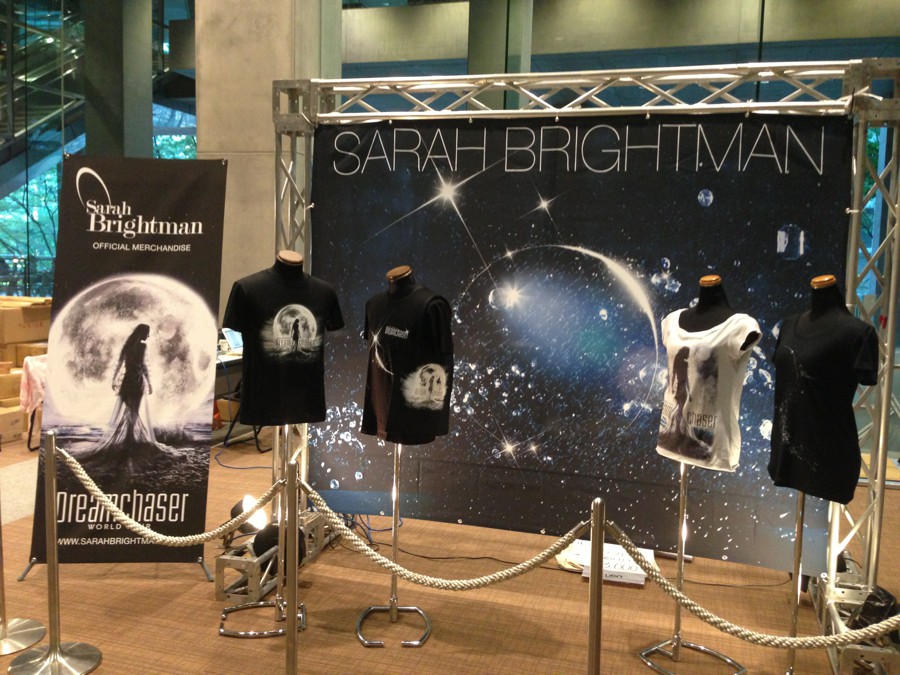 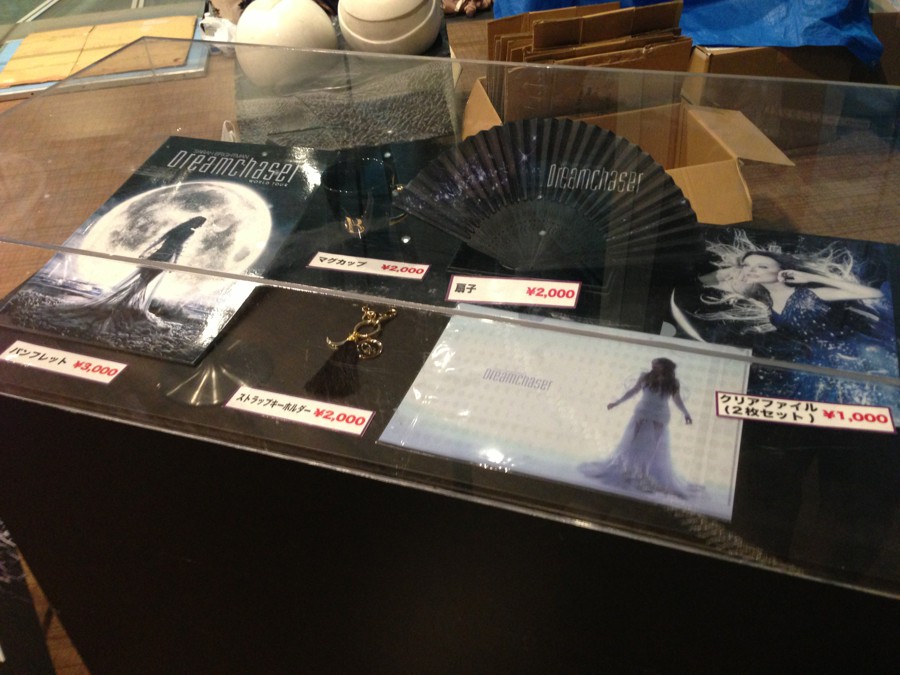 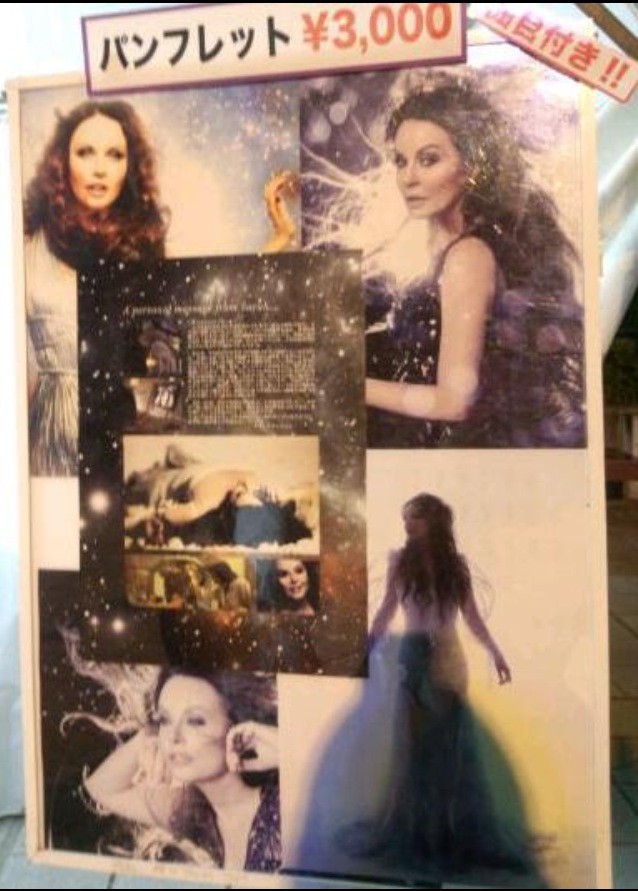 Hung around the cafe area for a little while before moving on to the third floor where the main hall was. 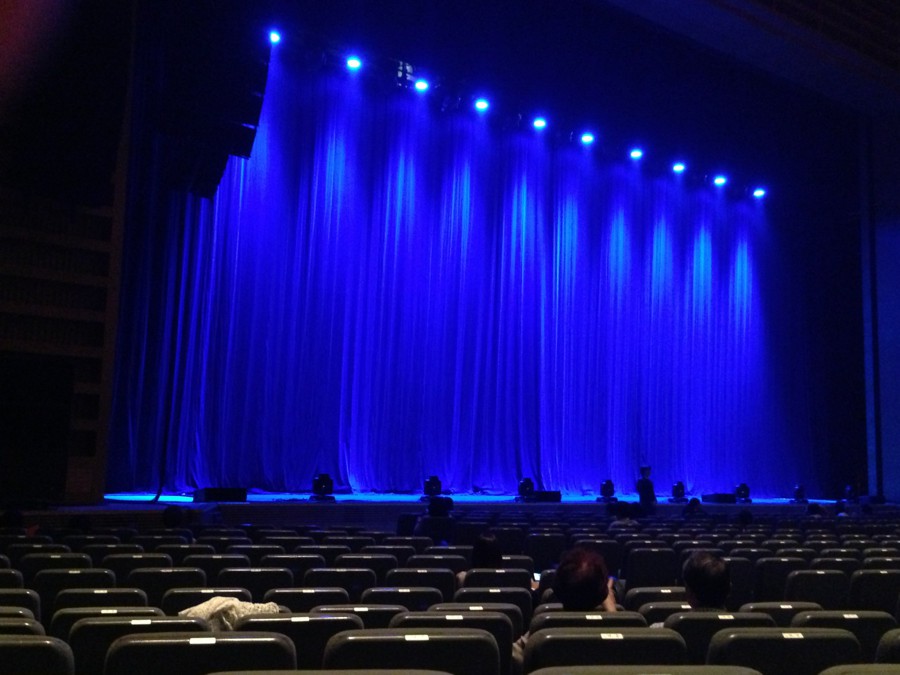 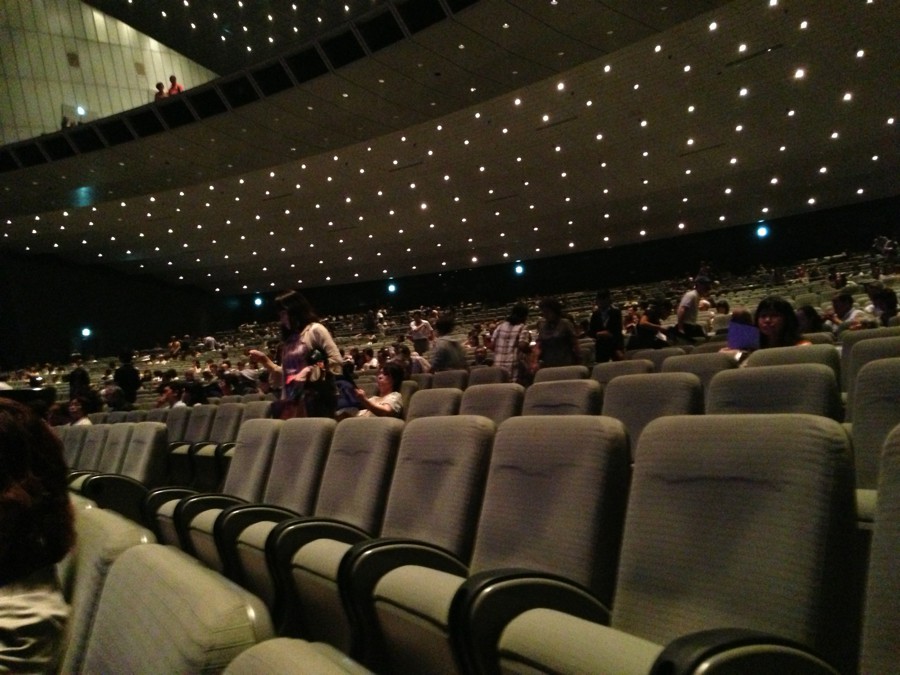 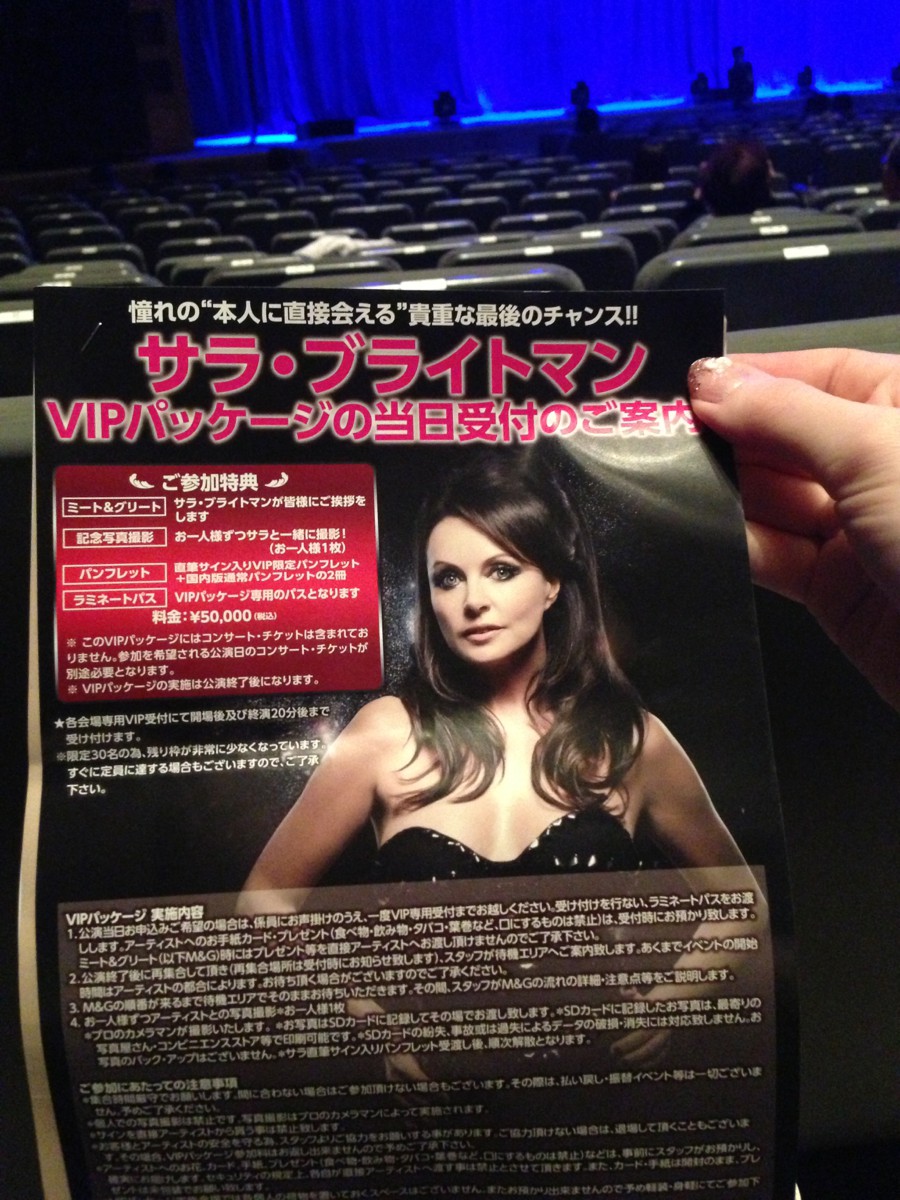 The show started at 7pm, and lasted for a couple of hours.

The staging, effects, etc. were really impressive. The whole back of the stage was a huge 3D screen! This tour's theme was a journey through space, and the "in space" 3D effect really did make quite an impression.

This was the setlist: 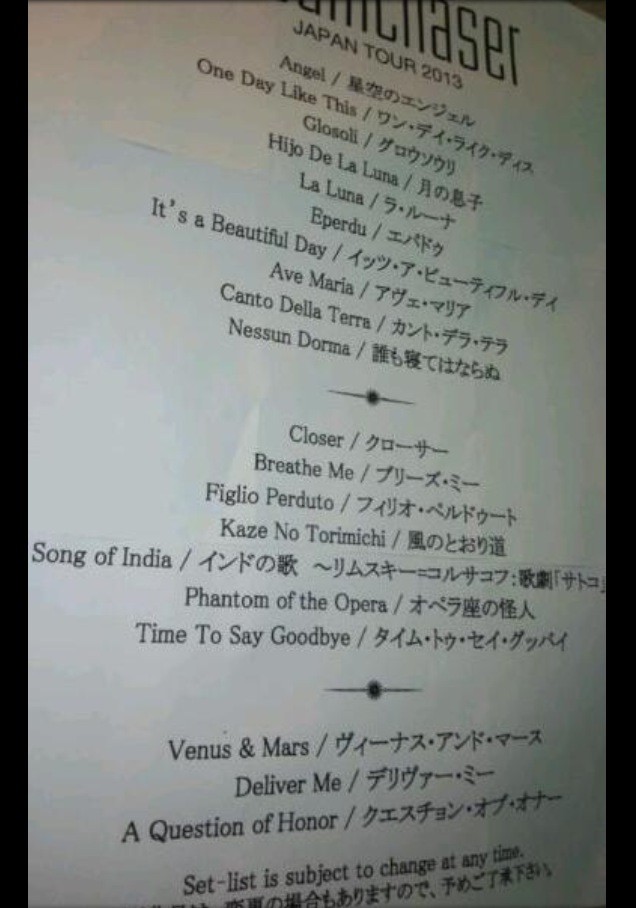 I haven't heard the latest CD, so I wasn't familiar with the new songs from that release. But I guess Sarah Brightman irl is the best way to have them introduced to you :D I expected to hear a few La Luna songs since the theme is similar. And was very happy Hijo de la Luna was one of them! It's such a pretty tune, and I like the story it tells. Same goes for Figlio Perduto! So many memories around these songs ♡

The highlight of the evening was definitely the title song from The Phantom of the Opera though ♪( ´▽｀) (Together with Erkan Aki.) I've seen her do some of the other songs, like "Music of the Night" and "Wishing You Were Somehow Here Again", but the title track is much more powerful. And it's just special having it sung by the original Christine, whom it was written for ♪ When the famous intro started playing people started applauding immediately. Sarah is so well liked here... I've attended her concerts in several countries, but Japan is the only place I've seen her interact with the audience like this. People in the crowd would shout comments at her, and she answered! She also did a few phrases in Japanese every now and then, which went over really well with everyone there. And I was surprised to hear her sing a Japanese song - Kaze no torimichi. It was incredibly cute, and people stood up for the following applause. And being Japan, of course she had to do A Question of Honor x) It's used as background music in SO many TV shows, commercials, documentaries, you name it!, over here.... It was really fun seeing it live, and took me by surprise!

Generally a great and spectacular concert. Really glad I decided to go :)

More fun stuff coming up after the weekend too! A couple of friends of mine are currently on vacation in Tokyo. Haven't seen them for years now, but was invited to join them at DisneySea on Tuesday :D Really looking forward to it ♪